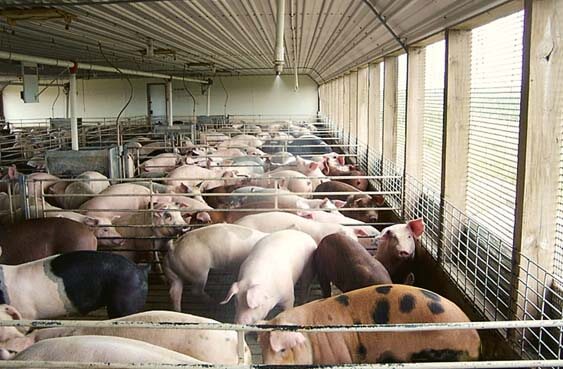 Water evaporating from a warm surface of an object will cool the object. This process is called direct evaporative cooling. Indirect cooling is accomplished by evaporating water into the air to reduce the air temp. If sprinklers are used, the water evaporating from the pig’s skin cools the pig because energy is removed from the pig to evaporate the water. About 1050 BTU’s of energy is absorbed form a pig for every pond of water that evaporates from the pig’s skin surface. In order to make evaporation easily occur, air movement over the pig should be significant, and the building must be well ventilated to remove the moisture that is being evaporated.

If you are located in humid region, indirect cooling is beneficial to consider. During stable weather patterns, the outside moisture level typically remains fairly constant throughout a day, and the air temp will typically increase during the day and decrease in the evening. As the air temp rises during the day, the relative humidity will decrease even though the actual moisture level in the air remains constant. So during the hottest portion of the day, the outside relative humidity will probably be at a level (often below 60% in the afternoon) that operating an indirect evaporative cooling system will be beneficial in reducing heat stress. If you are in a region where the relative humidity actually does stay high all the time, use of direct evaporative cooling should still be capable of providing heat stress relief as long as the relative humidity stays below 100%.