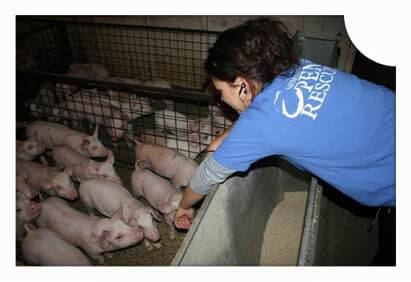 When anyone mentions Argentina the immediate thought is Argentine beef, however the world’s third largest grain producer naturally has a thriving pork industry and a herd of six million pigs with an abundant supply of feed, as most of the cattle are fattened on grass. And in the last 10 years, pig production in Argentina grew 109 percent; Argentina is ranked as the 20th pig producer in the world with a 0.22 percent of the total world production.

According to a report by the Argentinian ministry of Agriculture, last year, Argentina had almost 3.5 million head of pigs, a 6.06% year-on-year increase. And these pigs are spread out over more than 50,000 production units – from subsistence production to vertical integration. About 80% of the units have less than 10 sows and only 0.1% have more than 500 sows.

Argentina is not regarded as a large pork production nation, it is a growing industry. The Argentina government is investing money on the pig industry because they consider the pig production as a value added industry for their corn and soybean producers.

With the government funding, the pork industry has begun to install tunnel ventilation system for summer heat relief. However, the big problem for many is chilled pigs in winter conditions. The pig sale weights decline in the winter and feed conversion gets worse in winter. On the way to find out the reasons of this situation on many farms, it turns out the producers do not do a good job of minimum ventilation. They often use the tunnel curtain as the ventilation inlet for all seasons of the year, so there is no supplemental heat in winter. But on a modernized pig farm, other than the advanced breeding equipments, the complete ventilating and heating system is necessary, so now the advanced cooling and heating facilities are assembled. 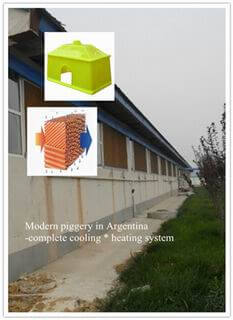 Actually, in the 1980s, the swine production in Argentina has already started a modernization stage. Owing to the pig farming intensification and genetic and nutritional improvements, the productivity and quality were bettered a lot. Besides, the vertical integration from primary producers investment in slaughter plants were also observed. The important investment was made in infrastructure, facilities and confinement equipments that noticeably improved productivity levels.

Until now, many modernized large pig farms in Argentina has mechanical ventilation, generally consisting of extractor s and fans; automatic feeding system; evaporative panel cooling system or water sprinkler. Of the farrowing/nursing sheds, the farms have heat systems, like thermal blankets, gas heating, radiated heat and salamander stoves. For the pregnant sows, the farms have pasture and confinement, like sow stalls and farrowing crates. And in Argentina, pigs are kept in extensive open air system, intensive confinement system, and in the combination of these two systems.
In general, by the technical efficiency and the expert skills of farmers, the pig farming industry of Argentina is well developing and well developed.