In the early days the pig was fed with food scraps, and late it became a sideline to the dairy industry. In order to utilize the products from butter and cheese manufacture, the pig was fed the left over skim milk and whey. The pig’s diet was next extending to include home grain, which allowed the industry to further expand. And the advanced feed devices and water fountains are used to meet the expanding for professionalization.

Before the pig industry developed, pigs were mostly kept as a sideline enterprise on mixed farms, they were kept in outdoor runs and rough shelters. Subsequent development brought better sheds and concrete yards for easy cleaning. Through further progress, many pig producers changed over to intensive housing. The intensive sheds had various forms of effluent disposal, such as slotted drainage floor pits. These were connected to either outside effluent ponds or were disposed by tanker trailer which carted the effluent off site where it was sprayed on the land for fertilizer. A further development was group housing in sheds using straw bedding.

There are many and varied ways to raise pigs in Australia. Farmers use different combination of housing for their pigs depending on their individual farm setup. Usually there are complete pig equipments in the pig house other than the advanced feed and water devices. 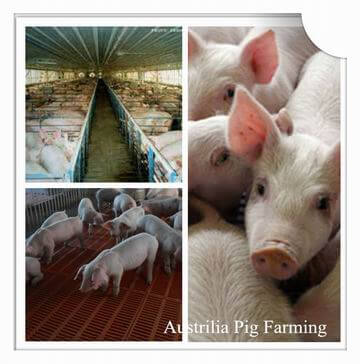 Sow stall and farrowing crates are two common devices use in today pig farming. The pregnancy pig is confined in the sow stall to make it easier for stock people to individually supervise and examine pigs and feed/water them. Pregnancy pig is moved to farrowing crates when giving birth to piglets and it is to reduce the trampling and crushing of piglets by the sow by forcing the sow lie down slowly and carefully. And the ventilating-cooling devices and heating devices are also necessary for high pig production quality.

The Australia pork industry has spent millions of dollars on research into how best to house pigs at various stages of growth. These research results have contributed to standards for housing pigs internationally and have shown that the Australian pig industry is dedicated to pig welfare, environment stewardship and to the education of stock persons who handle the pigs.

Farrowing crates are not the same thing as sow stall. When the sow give birth to the piglets, it is moved to a farrowing crates to prevent the sow from being able to get away from its piglets and to reduce the trampling and crushing of piglets by the sow by forcing the sow to lie down slowly and carefully due to the tiny dimension of the crate.
However, data provided by Australian Pork Limited states that the current industry average for pre-weaning deaths of piglets stands at 13.1%, so this figure would indicate that farrowing crates are not as efficient as we are led to believe. The reality is that constraining female pigs in cages reduces the amount of space a pig farm takes up and then allows a pig farmer to maximize sows and piglets numbers which in turn maximize profits.