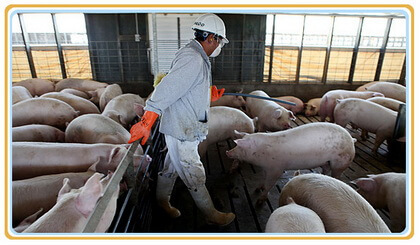 Pig production is the third most important system in Mexican livestock production. Enrique Martinez, the Mexico secretary of agriculture expressed that the Mexico government was going to take action to improve the live hog industry production and profits in the meeting about Mexican live hog production development convened in 2013.

Traditional and small scale production systems once was the leading ones in Mexico pig industry, but the main system of pig production in Mexico now is factory farms, that is the technically intensive pig farming.

Traditional backyard pig production is still quite common in the rural and semi-urban regions of Mexico. This system does not follow any established sanitary control procedures, and live pig quality is poor. However, this system is an important source for many consumers because of its low price and freshly slaughtered meat. So it is probably to remain a part of Mexico industry though it is not the leading system any more.