Foreword of Pig Feeder
Pig feet have no knuckles,so pigs cannot grasp or clutch things like monkeys or gorillas. Because of this, the feet cannot help themselves when eating, and they can only eat with the help of their long snout, which works like an excavator.

Due to the most delicious food for pigs are growing under the ground , like tuber of plants, pigs are experts in digging ground. Wild boars use their sensitive smell to find out the food, then they dig the ground to get what they want. The domesticated pigs have a shorter snout than wild boars, but they still keep the habit of digging. It is a necessary skill in wild environment for boars, while it seems annoying for the owners of pig farms. Why? As a result of the digging habit, the pigs are easily to get the feed outside of the feeder, which wastes the feed in a large quantity. Nowadays, the price of the feed is relatively high. For a large-scale pig farm, the waste causes great losses. But digging is a natural instinct of pigs, and it’s hard to change. To solve the problem, we should raise pigs in using the pig feeder or the pig trough properly.

Concrete Pig Trough
Many pig farms adopts rectangular concrete ground trough, which is very popular because of its small investment. Also, it is convenient for raising pigs with dry fodder or wet feed. Actually, the basic principle of pig trough is keep the forage in the trough as much as possible when the pigs digging in it with abandon. The width of the pig trough is 35cm with two different depth. One side of pig feeder is about 20cm deep , while the opposite side which close to the pigs is 2cm or 3cm lower than it. Such a design is in order that the pigs can get their feed easily through the lower side, meanwhile the higher side can prevent the pigs from snouting the forage out.

Additionally, we should place one third of the pig trough outside of the pigsty with consideration, which is easy for us to add feed for them. To some extent, the narrow space between the pigsty and the pig feeder can obstruct pigs from digging too violently. Thus, we can raise pigs by making full use of feed.

We know pigs like digging, and we also need to realize that pigs like competing when eating together. Putting aside the waste caused by their competition, we find that the stronger pigs get overfed, and the weaker ones get starving. Such an imbalance will cost much more than waste. So we should not only pay attention to the pig trough, but also the density of pigs in one pigsty. It’s better to provide space for each pig, and reduce their competition.

Generally we raise pigs in groups, and we can raise 4 to 6 mature sows in one pigsty. But we should keep one boar in one pigsty in case of they fight with each other. We can keep 8 to 10 immature pigs in one pigsty, and we can choose pig feeders depending on the numbers of pigs.

Even though the concrete pig feeder is cheap and convenient, but it’s not suitable for piglets. Piglets will be moved to nursery crate from farrowing crate after being weaned from their mothers. And they will live in the nursery crate more than one month. The piglets eat relatively less because their digestion system is still incomplete after weaning. 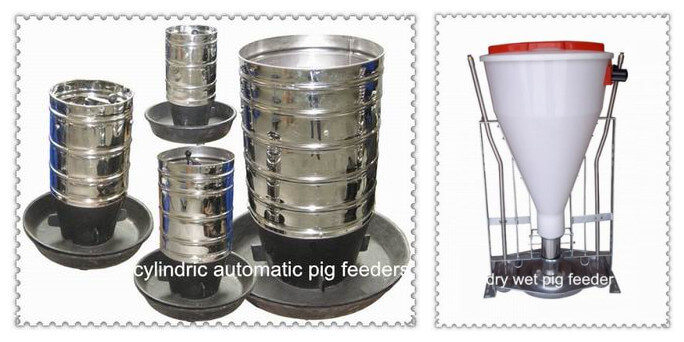 Feeders For Piglets
However, this is an crucial period for raising piglets. We can adopt self-help feeding method, and the piglets can eat whenever they want. We should notice the piglets is curious about everything, and they prefer digging for fun rather than eating. For sure, it will waste feed. So we often choose an automate pig feeder for the piglets. We can add feed from the roof of the funnel-like pig feeder the piglets. The piglets can eat the feed at the bottom of the feeder, and the upper feed in the automate feeder falls slowly at the same time. In this way, the piglets can get enough feed to grow up by self-help feeding method without wasting too much feed.

4.Grain feed
Grain feed contains corn, barley, wheat, sorghum, broad bean, pea and the like. It accounts for 50% or less than 60% of the feed.

5.Animal feed
It refers to silkworm chrysalis, fish protein concentrate, bone meal, dried blood, feather meal etc. And the dried blood is not suitable for feeding the piglets. We can mix the feed with the animal feed of the pigs with amount of 5% to 8%. Pay attention to the content and proportion of calcium and phosphorus.

6.Mineral feed
Mineral feed includes shell powder, egg-shell meal, calcium carbonate, calcium phosphate, salt and so on. The proportion of the mineral feed is 1% to 2%, and the salt should less than 0.5%. If you need to add microelement, you should strictly stick to the specified amount.

7.Green forage
Green forage covers duckweed, water lettuce, water hyacinth, the leaves and vines of crops, ryegrass, Chinese trumpet creeper and others. Green forage is succulent, nutrient and easy to digest for pigs, so the proportion of green forage is 35% to 40%.