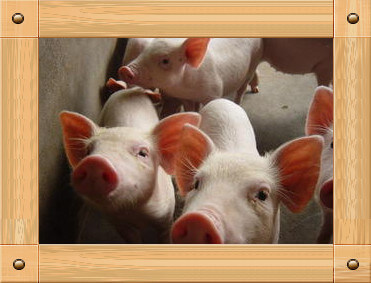 Prosciutto is a kind of traditional pork products with thousands of years’ history in Italy, and its distinct flavor makes it an indispensable food for Italians’ daily life. So this traditional food industry is one of the important aspects that support Italian pig industry.

The Italian swine business has been industrializing rapidly in the first decade of this century. While 83.3% pig farms in this country disappeared, the total number of pigs in Italy grew by 8.5% and the average number of pigs per farm grew by over 500%.

Despite the dwindling numbers of farms, the numbers of pigs, however, did increase. Numbers in 2000 were 8,603,141, whereas 10 years later, an 8.5% rise could be observed as then 9,331,314 heads were counted. As a result, the average pig farm had increased from 55 pigs to 356-a rise of 549.3%. Italy therefore is going through a relevant reorganization of the farms, from small and family style pig farming to industrially ones.

However, Italian pig producers are caught in the same pincer movement as many of their European counterparts—low pork price and high feed costs.

Traditional Italian pig producers enjoyed a plentiful supply of whey from the country’s cheese industry for pig feed via pipeline systems. But, today whey is in demand as a feedstock for biofuels. Maize traditionally has been used in animal feeds, however, Italian pig producers are experiencing what their US counterparts are dealing with high animal feed prices because demand for biofuel feedstocks is pushing up grain prices.

Co-products give the best saving for feed costs, but feeding pigs, a conventional diet with water, as soup, has generally given better performance than dry diets. What puts pig producers off is the high cost of investing in wet feed equipment, especially when money is tight. Given the current trend to bigger litters, though, wet feeding has to be given serious consideration, as it is well known sows eat more of a wet feed. A pig wet feed study found that wet-fed sows consumed 4.68kg feed per day through lactation versus 3.71kg per day for dry fed sows, and very importantly dry fed sows lost more weight than wet fed sows.

CIMA, an Italian wet feed equipment company, designed and manufactured a layout for farrowing sows, where 4  farrowing crates are positioned at 90-degree angles, with a central circular feed trough, which all 4 sows share. Feed is delivered through a down-pipe and each sow can see her three neighbors to help increase feed intake, because as soon as one sow starts to eat, the rest will follow suit. During weaning, sows are moved; farrowing crates are disassembled to become a weaner pen for the 4 litters. The piglets mix easier, because they have been in close contact since farrowing.