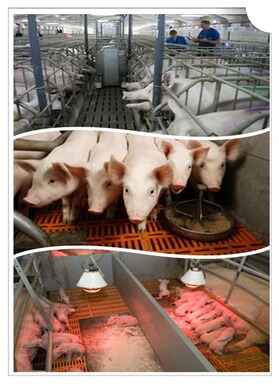 Russia is the world’s largest country stretching 11 time zones from Europe to Alaska. And Russia is currently seeing massive increases in pig meat production in an attempt to become self sufficient.

Russia is well-known for its state farms. These were large farrow to finish units of up to 6,000 sows. Although still in production many of these farms are now old with low productivity and in need of refurbishment.

According to the Russian Federal State Statistics Service reports, 2013 Russia pig inventories are approximately 18.8 million head and this is a noteworthy increase over the past years. And the big increase is a result of reducing backyard production (about 10% by volume) because of the outbreaks of African swine fever and reducing the competitiveness of informal pig producers compared with modernized pig farmers.

As a result of joining the WTO, prices for live pigs fell, and this led to the market being flooded with imported products, which is a little contrary to Russia’s attempt to realize the pig production self sufficient. Even though the efficient pig production has given rise to the increase in the number of domestic swine and pig herd, in light of the increased competition around the world, Russian pig farmers still have to work more efficiently. At the same time, a serious challenge to pig farmers and pig production in the country’s domestic market, which is posed by the Russia’s accession to the WTO, is another big reason.

The weekly survey of Russian pork market provides the convincing evidence that in order to achieve growth in pig production, business in the agriculture sector must invest in new areas—the modernized pig farms with latest pig equipments.

So Russia has a new breed of pig farmers. They are companies that previously engaged in slaughtered or imported and processed meat, building pig farms; and completely new companies starting from scratch and building farms, feed mills and slaughter-processing plants. These modern units fit into 2 main categories: one is multi site with sow farm, 1/2 nurseries sites and 2/3 finisher sites, which can hold 5,000 sows; the other is the site can manage 2500-3000 sows from farrowing to finishing. Most new farms are fully integrated with land to produce feed ingredients and for slurry disposal, feed manufacture, farms, slaughter-processing.

These new breed of pig farmers employ the latest pig farming equipments and techniques to do the pig raising, combined with feed manufacturing, slaughtering, processing and manure producing, etc. forming a vertical integrated pig farm which is not only saving the investment cost at some level, but also proving the ecological pig farming.